Skip to navigation Skip to content
Your Cart
All Products | New Products | Special Deals | Brands | Reviews | Blog | What is Overlanding? 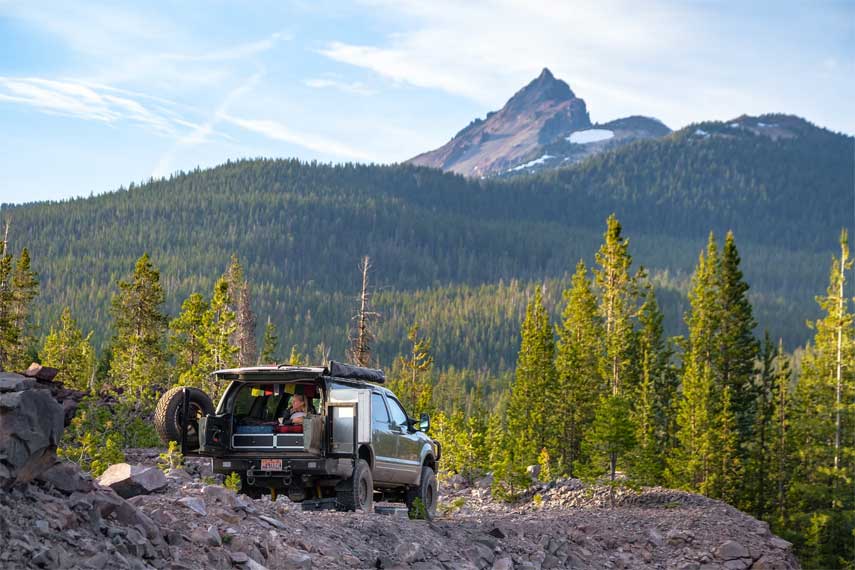 It goes without saying that the vehicle is the most important component of an Overlanding setup. In most builds, the cost of the vehicle itself will be far more than that of the additional off-road equipment and camping supplies.

We completely agree that you should allocate the majority of your budget to the Overlanding vehicle itself, but that doesn’t mean you should immediately purchase a G-Wagen or Defender. If you’re just starting this pastime, or if you’re low on funds, we recommend starting out with a low-cost, reliable and capable rig.

America’s fascination with SUVs and trucks has been ongoing for several decades. And while other nations may look down on us for it, we have so many fantastic Overlanding locations available, why shouldn’t we also have a number of options for capable vehicles as well?

Older SUVs and trucks are popular right now, especially in the Overlanding community. Adding expensive modern extras to a vehicle that is many decades old just seems odd, but it somehow feels right. However, as much as we would like to see these old workhorses given new life, they are still used vehicles. When comparing them to a new ride, a few things must be taken into account.

Having covered the pros and cons, here are a few vehicles for budget-minded Overlanders in search of a capable vehicle for their next adventure.

Subies are frequently regarded as the ideal off-road vehicle. However, when off-roading and aggressive Overlanding are on the menu, most consumers turn their attention elsewhere.

If you’re only familiar with the Outback by seeing them in the parking lot at your child’s soccer games, we’re here to remind you that it can do much more than simply park on the grass. You won’t find a budget-friendly Outback in the newer models but the first through third of generations of the Outback (1994–2009) are widely available, dependable, and reasonably priced.

The acclaimed symmetrical all-wheel drive from Subaru is renowned for its handling and off-road prowess. Additionally, although it doesn’t have the multitude of aftermarket add-ons a Wrangler has, the number of Outback off-road accessories is ever-growing.

Ground clearance is higher than a traditional wagon and additionally, the Outback has a wide range of all-terrain tire options available. Late third-gen models with low mileage can be had for under $10,000 and early models can sell for much less.

Are you looking for something a little bit out of the ordinary but with tested off-road DNA? Check out the Mitsubishi Montero. Its domination in Dakar during the 90s and 2000s is well known. Consider it to be comparable to a Japanese Land Rover of the era—just as capable, but more dependable.

Unfortunately, Mitsubishi ceased selling the Montero in America back in 2006. The majority of the rest of the world received these SUVs from it up until 2021 though. Like with any specialized vehicle, aftermarket and replacement parts are a bit hard to come by in the United States, but if you’re prepared to import, you can pretty much find anything you need from an overseas retailer.

Even while late U.S. models are becoming more scarce here, you can almost always find one for less than $8,000. Early/mid-2000s examples are available for under $4K if you don’t mind high mileage.

The Xterra is a frequently overlooked and disregarded off-roader when compared to its closest rivals at the time, the Jeep Wrangler and the Toyota FJ Cruiser.

However, the body-on-frame Xterra had a successful 15-year run that ended in 2015. Although this means that supply will only get worse, Nissan sold a lot of these in the early 2000s, so there are still some good ones out there.

We highly recommend looking for a 4WD model. It’s also important to point out that some Xterras were produced with a manual transmission, which will satisfy drivers who want a third pedal. Certain drawbacks include poor gas mileage and a lack of aftermarket support. But the Xterra is a fantastic SUV to use as the foundation for an Overlanding build.

A few years ago, we might have suggested the competent Pro4X model, but in the 2020s’ wacky used car market, they frequently sell for $20K+. With a little research, you can find lower-trim, second-gen Xterra S for under $10,000, giving you plenty of money for Overlanding gear.

It’s no secret that we are Toyota people at Overlanded. As fans of Toyota, we feel compelled to recommend a few well-known Overlanding icons. Particularly the third through fifth generations 4Runner. It may be the most well-liked platform in the entire class. Equally well-liked are the Toyota Tacoma and the iconic Land Cruiser, a monstrous SUV with a sizable cult following.

Although their durability and invulnerability require little introduction, in recent years their popularity and dependability have caused prices to soar to the point where it is difficult to suggest these models to would-be Overlanders seeking a high value proposition. They’re fantastic, so if you can locate one in decent shape for a reasonable price, buy it. But there are several other cars out there that are deserving of attention and have lower average pricing.

We could write a ton of articles on fantastic low-cost Overlanding vehicles. Just keep in mind that there are plenty more options than what we’ve covered here.

You can expand your options beyond the usual SUV, truck, or CUV and even consider vans. But bear in mind that maintaining a safe, functional, and capable car should be your top priority. Although unique and attractive, rigs like the increasingly popular school bus will probably not be easy to keep on the road. What use is all Overlanding gear if the vehicle they are in or on is always in the shop?

You may buy and build an Overlanding rig that fits your budget by using your practical thinking skills and conducting your research. In addition, the actual worth lies in the adventure and excitement encountered along the route, regardless of whether your vehicle costs $10K or $100K.

For more options sorted by low price ranges to high, check out our article The Ultimate Guide to the Best Overland Vehicles.